As a common human behaviour, we exterminate the ones we afraid of, and do everything for keeping the ones we like around. The only thing we cannot do is to accept them as city-dwellers, just like us humans.

Here I present you UrbanitAs: The Other City Dwellers aka Urban Animals. This is a photo series formed by the photos I took at different times and in several cities.

I believe we are too late to acknowledge that we are just another species dwelling here on this planet. But, perhaps looking around while strolling on the streets and realising that we are already living with a bunch of others side by side even in the most human-made environment (aka cities) may change our perspective.

I was in Sweden for a conference and visited Uppsala and Stockholm. This edition is dedicated to UrbanitAs living in (and mostly flying over ) these two cities of the North. 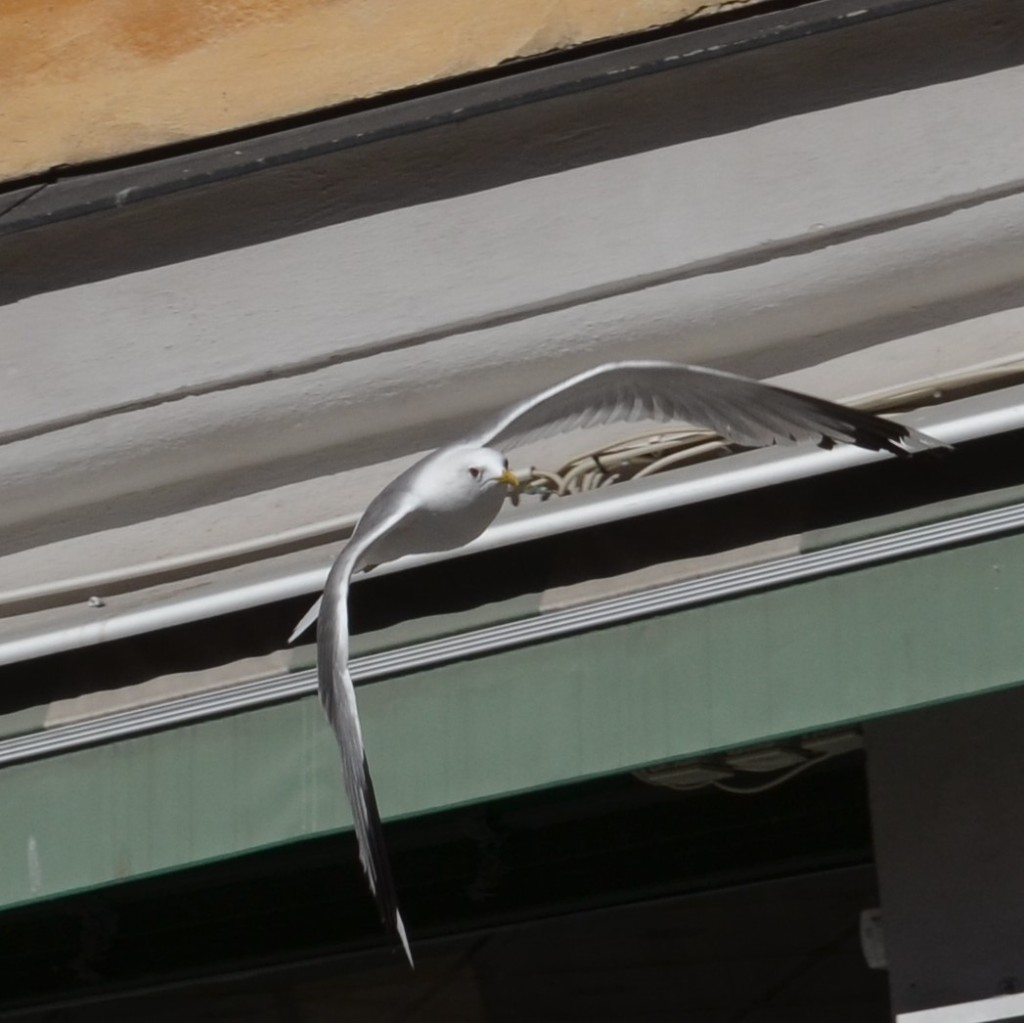 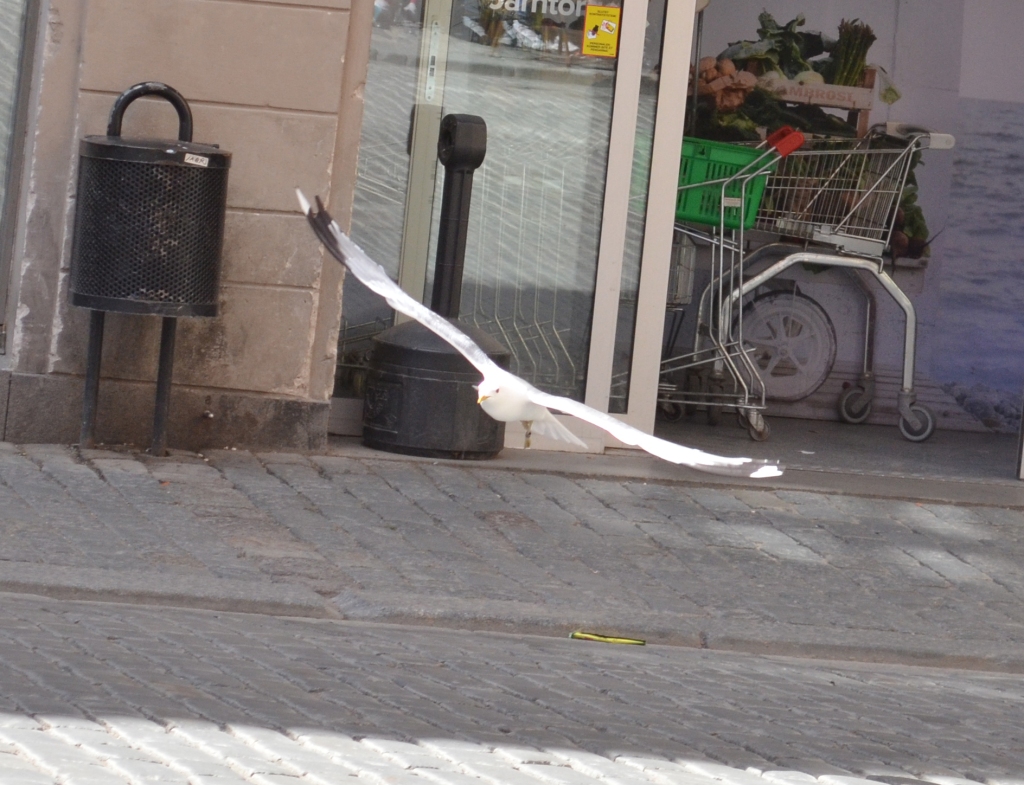 Some statues mark their presence with a twist, and this is one of them: the statue of Duke of Wellington in Glasgow.

The statue is a part of the cityscape and famous with its cone on top of it. 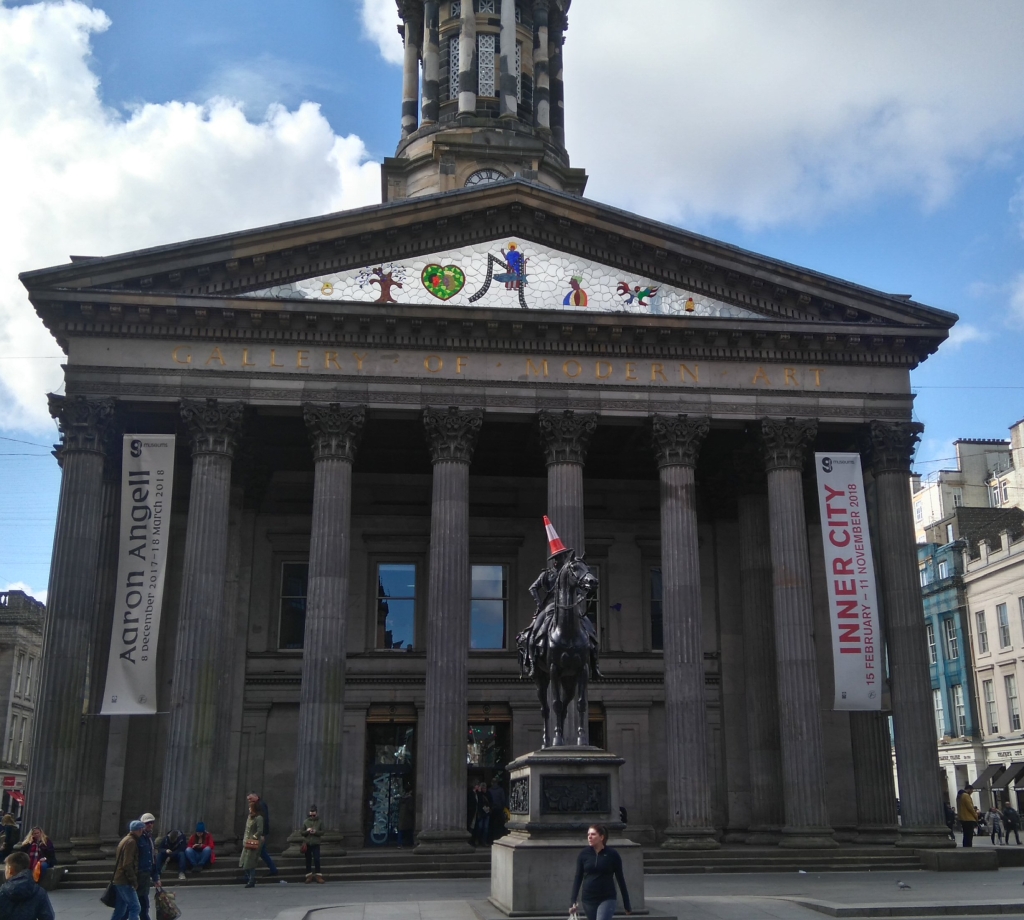 The statue was erected in 1844. So, the story goes back some time. Not a definite one. It is not certain when the cone was first placed. But, one day, people of Glasgow woke up with a scene that an equestrian statue of a mighty Duke appeared to have a traffic cone on its head.

The statue was listed one of the top ten most bizarre monuments on Earth by Lonely Planet (inews). The statue is loved by the public and the tourists that it has many appearances such as the one below: a replica of the statue erected in the opening ceremony of Glasgow’s 2014 Commonwealth Games. Lovely, isn’t it?

Despite the statue’s popularity, the cone was removed and put back several times. The council even enacted some plans to end this tradition of putting the cone back. The plans were backfired, for obvious reasons. Who does not like a Duke with a cone? Why would it be another boring man with a horse?

The council had said that raising the height would end a practice which projected a “depressing image” of Glasgow and would save the £10,000 cost of removing the cone 100 times a year. The scheme would have seen a new granite-clad concrete base of 86cm (34in) added to the memorial to raise its overall height.

However, the council has reconsidered its decision after an online petition called “Save Wellington’s Cone”, which gathered thousands of signatories in just a few hours, and a Facebook campaign which had planned a rally in support of the cone.

A council spokesman said: “The wording of the report was appalling and the leader of the council (Gordon Matheson) has instructed officers to withdraw the planning application.” (BBC)

Also, as the campaigners state “The cone on Wellington’s head is an iconic part of Glasgow’s heritage, and means far more to the people of Glasgow and to visitors than Wellington himself ever has.” (BBC). Also, in the campaign, there are a couple of good points which may affect the council’s decision such as  “does anyone really think that a raised plinth will deter drunk Glaswegians?”. Well, I agree with that!

There is one point we are not quite sure: What would Duke Wellington think about this?

Luckily we have historians! According to inews, Dudley-Edwards argues that “Wellington himself would have been amused by the practice and embodied the ‘keep it coney’ ethos” as “He liked to keep it real”.

At the end of the day, the duke with a cone is a Rabelaisian act against mightiness of equestrian figures. While equestrian figures are usually associated with power and glorification of a person, the cone turns the statue into a human being again. It leaves you with a smile (and with a selfie apparently if you are visiting the city).

Even better, the statue is located right in front of the Gallery of Modern Art as the second twist in this story.

Yes, that is right. There is a classical equestrian statue right in front of a modern art gallery and it has a cone on the top of its head!

Bonus: A rare shot of the statue without a cone, but with a seagull! 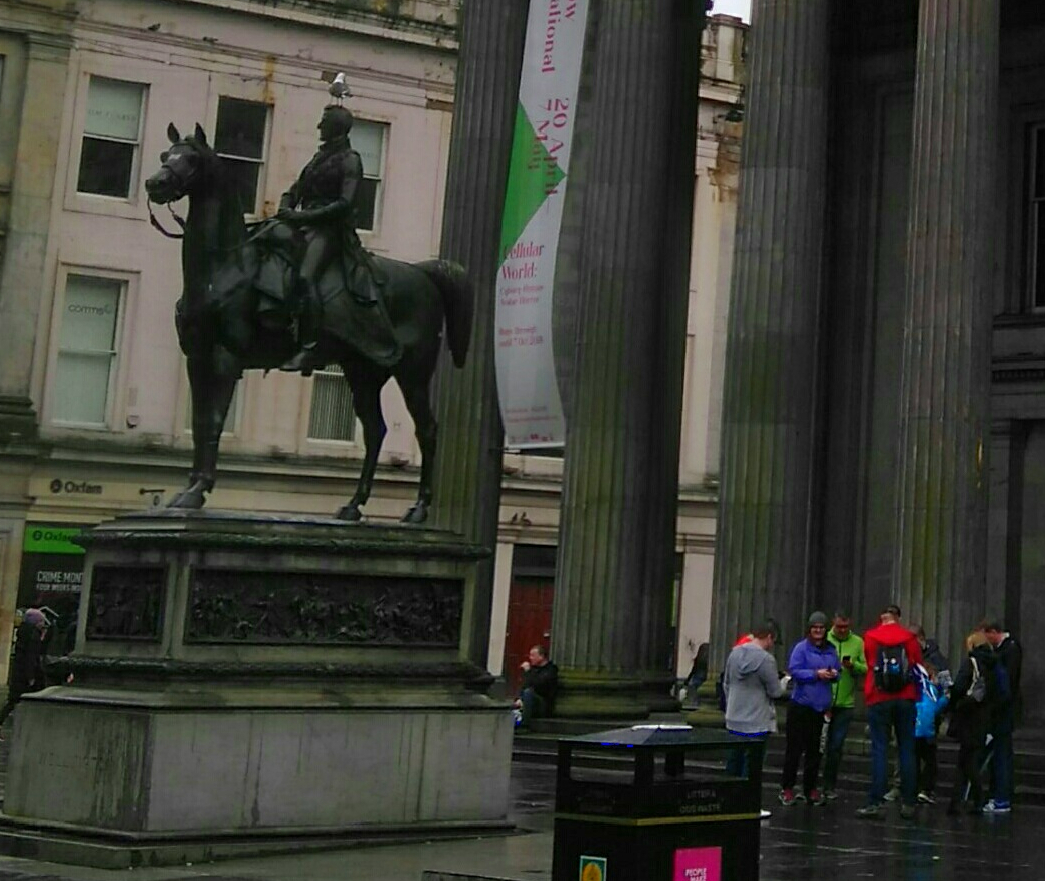 This literature mapping focuses on place-making literature and presents a cross-disciplinary cut of current literature.

As part of the mapping process, ‘literature mapping’ is developed as a methodology to produce a broad literature mapping in a limited timeframe. This working paper presents the research methodology by discussing its development processes (comparing and contrasting available academic indexes, their limitations and strengths, and recommendations on their future use).

The results show an extensive interest in various disciplines in place-making as a concept and in its various aspects, as well as demonstrating the increasing interest in urban design literature in social and perceptual aspects of design.

The Urban Big Data Centre works on the cycling, walking and running activities of people living in Glasgow in the project of Glasgow in Motion:

By 2030, over 90% of the UK population will live in urban areas. It’s more important than ever to understand how we live, work, and travel in our cities. Imagine you could know the most popular cycling route to work, the quality of air on your journey, or how pedestrians respond to weather. Through Glasgow in Motion, you can view and interact with data through time, to better understand movement and other factors that affect Glasgow residents every day.

It is a great project which returns the collected data to the use of citizens after anonymizing it. The interactive map shows busy and popular routes for walking, running and cycling. The range of data presented goes back to 2013 and the mst recent data is from 2016.

Check here for the details and exploring the interative maps.

As folks of great Earth, Wind and Fire told us, it is All About Love, and Fred Kent from the Projects for Public Spaces cannot agree more!

Places exude a kind of magnetism, a draw that brings people closer together—lovers and strangers, alike. Whether sharing a kiss, or simply sharing a bench, there are endless examples of closeness and affection all brought about by great public spaces.

This affection isn’t just icing on the cake; it’s a basic human need. “It’s a big idea, affection,” observes PPS founder Fred Kent, “because it’s everywhere. Every community, every culture, every human being has a need for affection, for engaging with people, for connecting with people.” As our recent Healthy Places report reveals, social support and interaction provides important benefits to mental wellbeing and feelings of safety. Meanwhile, social isolation contributes to depression, stress, and can also undermine a community’s resilience in the face of disaster.

But affection relies on a deep sense of comfort. People must feel physically and mentally at ease before they open up to show signs of love and friendship. (Project of Public Space)

Check this great article on what makes public spaces places for people!

Or you can just listen to the folks below.

The trees and the birds
And if there ain’t no beauty
You gotta make some beauty
Have mercy
Listen to me, y’all

We have started a new project on the value of urban design.
See below a brief definition of the project published on CaCHE blog.

The impact of housing and neighbourhood design quality on wellbeing is achieving increasing recognition (Klienert and Horton, 2016), but there is little evidence to back up these claims in a format that is useful to decision makers (Samuel et al., 2014). The UK Collaborative Centre for Housing Evidence (CaCHE) is seeking to change this with a new strand of research on understanding and evidencing design value.

The need for standardised design guidance and consistent design control across local authorities has been recognised, for example, with a recent consultation document on ‘planning for the right homes in the right places’ (UK Gov, 2017) and, more broadly, in the academic literature on design governance and placemaking (e.g. Carmona 2016; 2017; White 2015).

Currently, decision makers suffer from an absence of coherent evidence to enable built environment professionals in the public and the private sector to make decisions about new housing and neighbourhoods…

“To think of shadows is a serious thing.”

A Guardian investigation revealed the expansion of pseudo-public spaces in London recently.

Pseudo-public spaces – large squares, parks and thoroughfares that appear to be public but are actually owned and controlled by developers and their private backers – are on the rise in London and many other British cities, as local authorities argue they cannot afford to create or maintain such spaces themselves.

Although they are seemingly accessible to members of the public and have the look and feel of public land, these sites – also known as privately owned public spaces or “Pops” – are not subject to ordinary local authority bylaws but rather governed by restrictions drawn up the landowner and usually enforced by private security companies. (Guardian)

The map demonstrates the locations and distribution of these spaces in London. It lists 46 known pseudo-public spaces in the city. The expansion of these areas is quite widespread within the city boundaries.

This is a critical issue regarding the role of public spaces in socialisation as well as citizen’s right to access to open spaces. These privately-owned spaces are accessed by the discretion of the landowners as well as controlled by the private security staff in some cases, which means that the use of the space and the behaviours within these spaces are also under control by some rules other than laws or common legislations.

It gets interesting when 12 other cities, including Manchester, Liverpool, Birmingham, Leeds and Glasgow, rejected revealing the information about the pseudo-public spaces located ion these cities. This poses a question of the level of expansion of these spaces. It also poses another, and even more critical question regarding the production and perception of public space: 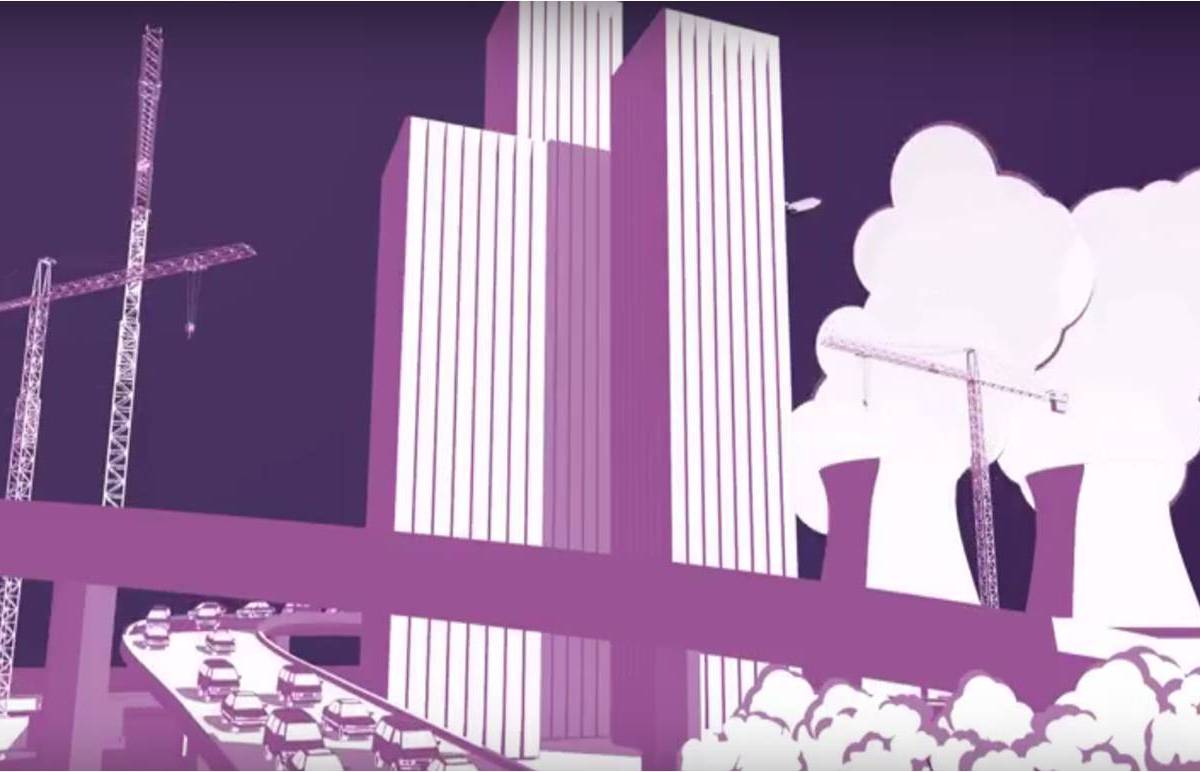 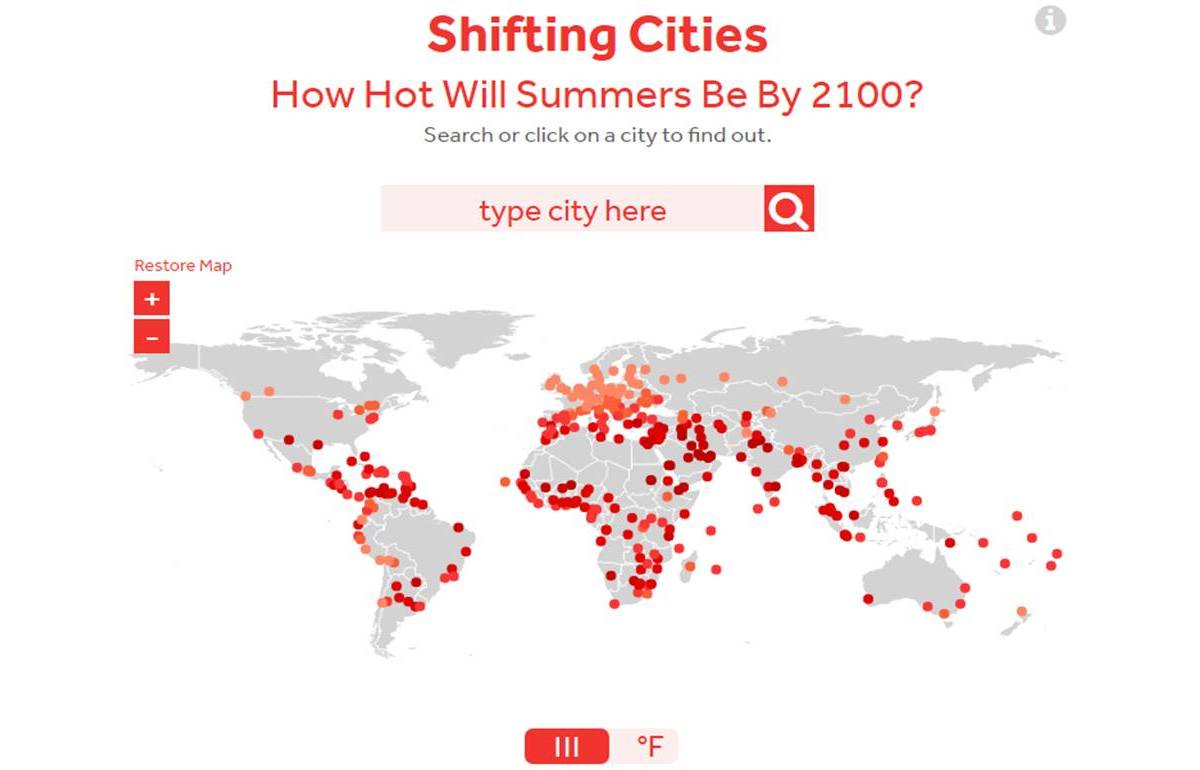 To illustrate just how hot cities’ future could be and the choices they face, Climate Central created the interactive above in partnership with the World Meteorological Organization. It shows how the average summer high in the future in each of these cities compares to other cities of today. In some cases, the shift puts them in a completely new temperature zone. (climatecentral.org)

Click here for the interactive map to search your city and more.