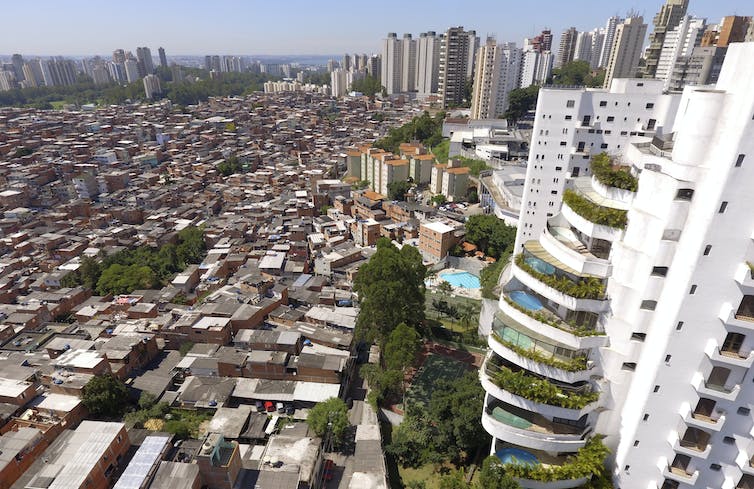 Developers in London have come under scrutiny for segregating people who live in social or affordable housing from residents who pay market rates. Prominent cases have included children from social housing being blocked from using a playground in a new development, and “poor doors” providing separate entrances for social housing residents.

Of course, segregation has long been a reality in cities around the world. For example, gated communities have been documented in the US cities since the 1970s, while racially segregated urban areas existed in South Africa under apartheid. Research by myself and other academics has shown that urban spaces which divide and exclude society’s poorer or more vulnerable citizens are still expanding rapidly, even replacing public provision of facilities and services – such as parks and playgrounds – in cities around the world.

Gated developments in Gurgaon, India, have created a patchwork of privatised services; elite developments in Hanoi, Vietnam, offer rich residents cleaner air; and luxury condos in Toronto, Canada, displace local residents in favour of foreign investors. An extreme example is the Eko Atlantic project in Nigeria – a private city being built in Lagos, where the majority of other residents face extreme levels of deprivation and poverty.

A commodity, or a right?

Although these developments come with their own unique context and characteristics, they all have one thing in common: they effectively segregate city dwellers. By providing the sorts of facilities and services which would normally be run by public authorities, but reserving them exclusively for certain residents, such developments threaten the wider public’s access to green spaces, decent housing, playgrounds and even safe sewage systems.

Access to basic services, which was once considered to be the right of all citizens, is at risk of becoming a commodity. Privatisation may start with minor services such as the landscaping or upkeep of neighbourhoods: for example, the maintenance of some new-build estates in the UK are being left to developers in return for a service charge. This might seem insignificant, but it introduces an unregulated cost for the residents.

Privatising the provision of municipal services may be seen by some as a way for wealthier residents to enjoy a better standard of living – as in Hanoi. But in the worst cases, it puts in a paywall in front of fundamental services such as sewage disposal – as happened in Gurgaon. In other words, privatisation may start with insignificant services and expand to more fundamental ones, creating greater segregation and inequality in cities.

My own research on branded housing projects in Turkey has highlighted the drastic consequences of the gradual expansion of exclusive services and facilities through segregated developments. These private housing developments – known for their extensive use of branding – have sprung up in Istanbul and other Turkish cities over the past two decades, since the government began to favour a more neoliberal approach.

By 2014, there were more than 800 branded housing projects in Istanbul alone. They vary in scale from a single high-rise building to developments aiming to accommodate more than 20,000 residents. Today, this development type can be seen in every city in Turkey, from small towns to the largest metropolitan areas.

This literature mapping focuses on place-making literature and presents a cross-disciplinary cut of current literature.

As part of the mapping process, ‘literature mapping’ is developed as a methodology to produce a broad literature mapping in a limited timeframe. This working paper presents the research methodology by discussing its development processes (comparing and contrasting available academic indexes, their limitations and strengths, and recommendations on their future use).

The results show an extensive interest in various disciplines in place-making as a concept and in its various aspects, as well as demonstrating the increasing interest in urban design literature in social and perceptual aspects of design.

We have started a new project on the value of urban design.
See below a brief definition of the project published on CaCHE blog.

The impact of housing and neighbourhood design quality on wellbeing is achieving increasing recognition (Klienert and Horton, 2016), but there is little evidence to back up these claims in a format that is useful to decision makers (Samuel et al., 2014). The UK Collaborative Centre for Housing Evidence (CaCHE) is seeking to change this with a new strand of research on understanding and evidencing design value.

The need for standardised design guidance and consistent design control across local authorities has been recognised, for example, with a recent consultation document on ‘planning for the right homes in the right places’ (UK Gov, 2017) and, more broadly, in the academic literature on design governance and placemaking (e.g. Carmona 2016; 2017; White 2015).

Currently, decision makers suffer from an absence of coherent evidence to enable built environment professionals in the public and the private sector to make decisions about new housing and neighbourhoods…

We have started a new project at CaCHE on housing supply and its discontents in the UK:

Perhaps one of the biggest political and societal challenges of our time is housing supply. Even the UK Government thinks the housing market is broken and our biggest housebuilders say they alone won’t be able to deliver the number of homes necessary to meet policy ambitions. In England, the growing lag between planning approvals and housing completions is given as one explanation for the sluggish speed of housing delivery and is of increasing political and popular interest. Yet, build out rates form only one part of a much more complex set of processes that determine the speed and mode of speculative housing delivery. How housebuilders interact with land markets, make product selection choices and manage construction programmes are also likely to influence supply outcomes. …

It is for these reasons that we have chosen to focus our exemplar project on a systematic review of existing evidence around how the speculative housing supply system currently works and consider the limitations to its current operation. In doing so, we will be able to evaluate whether, and to what extent, the speculative housebuilding industry is able to address new demands in the supply side of the housing market and reflect on how policy solutions brought forward to address housing supply problems have been effective or otherwise. (CaCHE)

To read the details of the project, click here.

When it comes to gated communities, recurrences of similar everyday life images and spatial representations in mass media form a discourse of the future everyday life. It depicts an ideal living environment that aligns neoliberalization with an idealization of private urban services, commodified forms of housing production, enclave living and exclusiveness, as well as the glorification of consumerism. This aligns with neoliberalism’s “pervasive effects on ways of thought to the point where it has become incorporated into the common-sense way many of us interpret, live in, and understand the world” since the 1970s (Harvey, 2007, p. 3).

Understanding the role of this discourse in the imagining and producing of future everyday life in cities is critical for the production of urban space in the future and for the role of utopian thinking. In this respect, a critical investigation of the representation of future everyday life in housing developments would provide some insight on these issues. This particular case study focuses on mass media representations of the branded housing projects developed in Istanbul, which provide some clues.

Public Seminar is a critical platform for researchers on topics varying from contemporary politics to urban issues. The Imaginal Politics strand, edited by Chiara Bottici, Judith Butler, and Aris Komporozos-Athanasiou, presents some brilliant works on imagination, spectacle and discourse:

A collaboration between University College London & the New School for Social Research, this Public Seminar platform provides a forum for the study of imagination and its function in contemporary political economy. Publishing original contributions from a broad range of critical theory, we will explore the futures that are being socially produced against the backdrop of financial capitalism, and the opportunities for mobilizing a radical imagination to resist political dystopia.

Click here to read a very interesting selection short articles, including one from me 🙂

“Have you noticed the change in the city?”

The above slogan is from an advertisement for a branded housing project in Istanbul (Figure 1). Istanbul is changing, so do the other cities in Turkey. The change is unprecedented and controversial. The change follows the neoliberal restructuring in this country, and in this context, branded housing projects, as housing enclaves providing services and facilities exclusively for their residents, have been developed since the early 2000s. The branded housing projects are produced under certain brands and advertised extensively through mass media while implementing various branding techniques and strategies. Although their extensive development in turkey take attention, it should be noted that this type of development is far from being a unique and can be seen in many other contexts such as Latin American Countries, Singapore, India, and Nigeria. (Research Turkey)

I wrote a piece on framing housing in mass media and its discontents for Research Turkey.

“Ever wanted something more? Ever thought there could be a better way to live free from the shackles of the old tired world?” Here, Dr Bilge Serin talks us through the new world of commodified housing developments.

The above slogan is from an advertisement for a fictional housing development in the recent movie High-Rise. The movie is an adaptation of J.G. Ballard’s novel written in the 1970s. This fictional advertisement has many similarities with actual ones for so-called luxury housing developments, and presents a trend in the representation of housing futures in mass media – in the UK and in many other contexts.

Representation of housing futures in mass media is an interesting issue. First of all, it is an intricate one involving various layers – from the representation of everyday life and future residents, to the construction of the housing project itself. Understanding this mass media…

For the full article on European Journal of Turkish Studies, click here.